Paintball is a perfect activity for that period of the year when it starts to get cooler and the summer is gone. The paintball is a team sport which consists of shooting balls full of paint against the members of the opposite team, using markers to reach a specific objective, which can be modified depending on the game modality. This post will be about the history of the paintball.

Paintball was born as a shooting game between two friends in the forests of Henniker, New Hampshire (United States) and was baptised as National Survival Game, considering that at the beginning it was a game, and not a kind of sport. On 1976, the broker Hayes Noel and his friend Charles Gaines, writer, were speaking about the last trip of Gaines to Africa, and his experience hunting buffalos. At that moment, a great idea came to their minds; they decided to create a game where they could recreate the fact of stalking and hunting between them.

During the following months, both friends discussed about the qualities and characteristics that a good hunter and survivor should have. However, they didn’t know how to test those skills. One year and a half later, another friend showed them a gun of balls full of paint from an agricultural catalogue. That “gun” was a marker called Nelspot 007, made by Nelson Paint Company, which would become later the most important paintball markers-maker company in the world. Originally, it was used by ranchers to mark the cows. Noel and Gaines bought a marker for each one and fought a duel. It was the first paintball game, and Gaines was the winner.

From then on, these friends invented the basic rules of the game based on capture the flag, and they invited to other friends to play the game as well. On 1980, Sports Illustrated published an article about the game, and this made it get relevance and nationwide interest. After that, both friends signed a contract with Nelson Paint Company to become the exclusive distributor of their paintball equipment. It was a success in the United States, so they had to start discharging franchises in other countries. This meant the spreading of the game around the world. 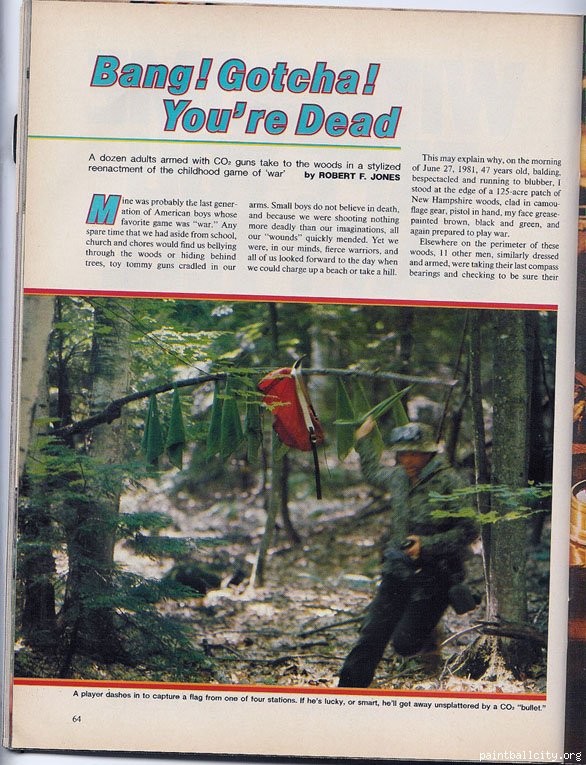 Since its birth, paintball has involved a lot of temporary and permanent players. Sporting Goods Manufacturer’s Association estimates that just in the United States, about 10 millions people play paintball annually.

If you want to start practicing this sport, OcioAventura Cerro Gordo have all the necessary equipment for you and your friends. We also have our own camp at your disposal, where you could play, but we can transport the equipment to another place to create a new camp wherever you wish.